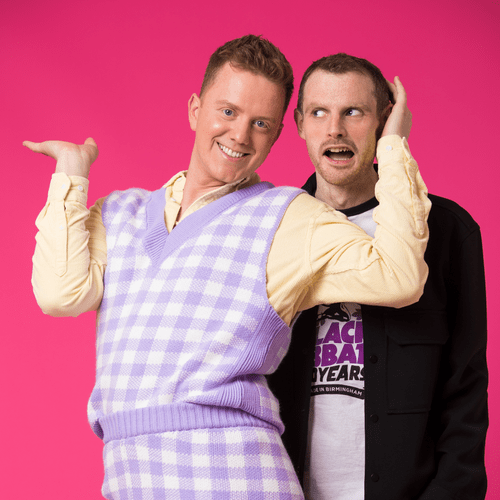 Hosts , A Gay and A NonGay

James Barr is a multi-award winning podcaster, comedian and radio personality. James is currently waking up the UK alongside Fleur East on Hits Radio Breakfast where he recently won Silver for Best Breakfast Show at the radio industry’s prestigious ARIAS Awards. In 2021 James’ podcast A Gay and A NonGay won Bronze for Best Entertainment at the British Podcast Awards. A Gay and A NonGay has now amassed over 5 million listens and includes Billy Porter, Kitty Scott-Claus & Vanessa Feltz as fans. As part of his podcast James has kissed his straight co-host Dan Hudson on the front cover of Attitude magazine, smashed a critically acclaimed five star run at the Edinburgh fringe festival and starred in a must-see BBC iPlayer TV documentary set at Bloodstock festival. ‘Sashay To Hell’ was named Radio 5 LIVES documentary of the week and follows James' horror experiencing the UK’s most extreme heavy metal festival. In comedy, James’ debut stand up show Thirst Trap was named “an absolute triumph” by The Sun in 2019 and featured in The Independent's Top 50 jokes of the fringe.

Dan Hudson is a multi-award winning podcaster, producer and radio host. As half of the UK’s leading LGBTQ+ podast A Gay And A Nongay, he has won numerous awards including most recently in the Best Entertainment category at the British Podcast Awards 2021. He is an expert on rock and alternative music, hosts a weekly Spotify radio show Dan With The Sickness, and was formerly the host of the Official Rock Chart on Kerrang! Radio, where he interviewed everyone from Metallica to Hulk Hogan. Last year the BBC released Sashay To Hell¸ a TV documentary set at extreme heavy metal festival Bloodstock, that became BBC Radio 5 Live’s Documentary of the Week and Kerrang! Magazine’s Documentary of the Month. He is also a  fundraiser for Marie Curie – he recently raised £6000 for the charity - and is currently into the Top 1% of fundraisers on Justgiving.